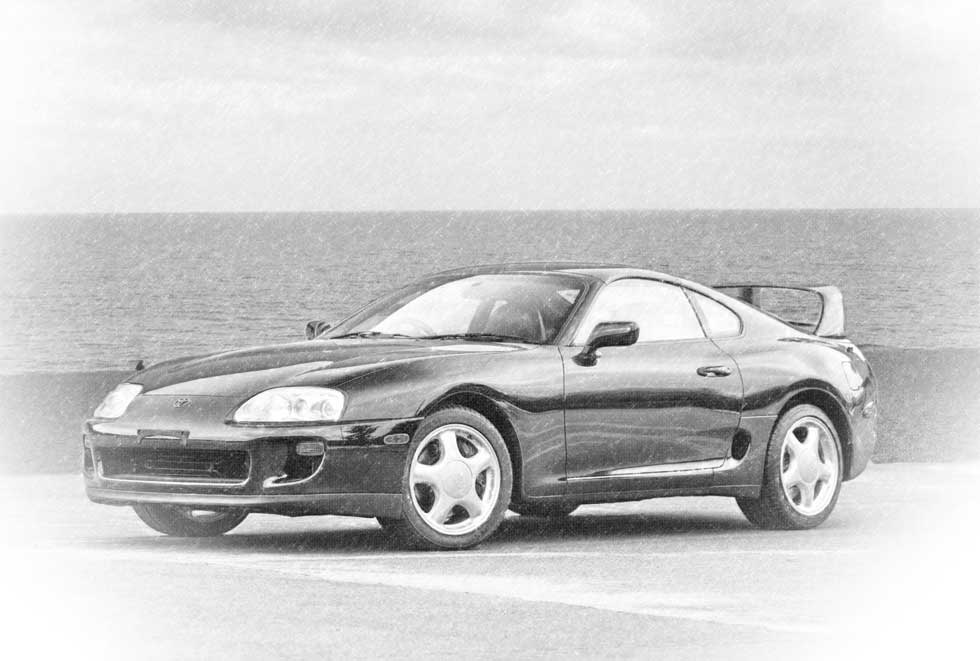 Toyota's Supra may have grown out of the Celica sports couple but by the time the Mk4 was introduced it had morphed into a different beast altogether; one whose power was so great that it had to be curbed for it's own good.

Toyota had decided to create a seriously high performance car. Excess weight was got rid of by extensive use of aluminium in the chassis and suspension and lighter weight materials were substituted throughout the car where it was practicable to do so, even down to the use of hollow fibres in the carpet and a steering wheel made of magnesium alloy.

Two new three litre six cylinder engines were introduced; one of them was naturally aspirated but the other had twin turbos. These turbos worked in tandem. The first one cut in as early as 1800 rpm but the second came in at around 4000 rpm. This smoothed out the turbo boost. One of the problems with turbos is that throttle response can be very slight until they cut in and then the driver gets a hefty shove in the pants; this twin turbo system gave much better throttle response over a wider RPM range. Performance with both engines was exhilarating; with the turbo version it could be positively shattering with nought to 60 in under five seconds. Top speed was potentially over 180 mph but this was electronically limited to 155 mph, which most people considered to be quite fast enough, thank you.

Perhaps unsurprisingly the turbo version was fitted with larger 17" wheels so as to make room for larger brakes!

If you fancy buying one, though, you'll need deep pockets. Not many were built and demand is high so getting a cheap second hand one can be a problem. In particular the turbo has proven very popular with drag racers and exponents of drifting who try to rip the tyres off their cars whilst hurtling sideways around bends. By delimiting the engine a lot more power can be unleashed but a good tuner can get even more, especially if nito is used instead of boring old petrol. Some pepped up engines are pushing out 1000 brake horse power or even more.

Nothing more different from a dependable but boring Toyota Corolla could be imagined. As a GT the Mk4 Supra had near-supercar performance without the huge expense of a Ferrari or Lamborghini; but with the high design and quality control standards that Toyota are rightly blessed with.