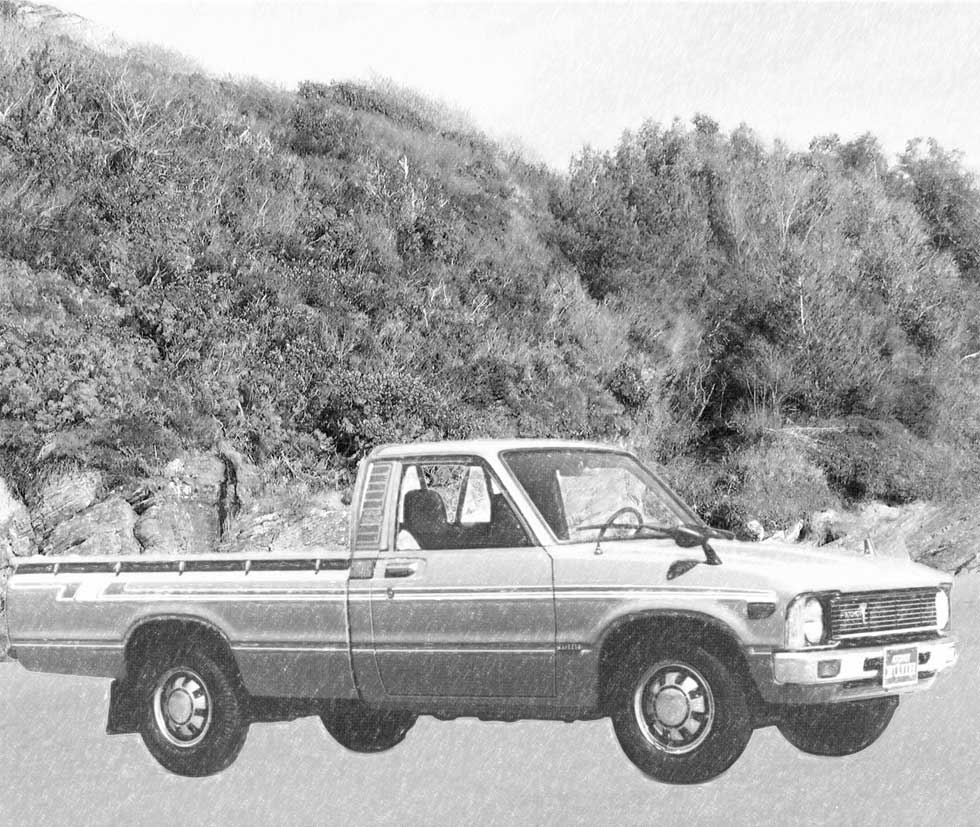 The Toyota Hilux, launched in 1968, eventually became as synonymous with the UK building trade as the bacon butty, copy of the 'Sun' newspaper and well stained mug of tea; the 'can do as long as it's cash' attitude; and the infamous displays of 'builder's bum'. Like the typical builders of those pre-elfen safety and political correctness days it was tough, and frequently mistreated but could tackle just about any thing that was thrown at it.

It started off a little anaemic though. When first launched it had a 1500 cc four-cylinder engine developing just 77 brake horsepower and it had a top speed of a fraction over 80 miles an hour but who would want to do that sort of speed with a ton of bricks in the back is beyond me. Acceleration from nought to 60 has never really been tested but you didn't buy this to race around in. In a business in which versatility and dependability made the difference between success and failure a reliable pickup that could handle any amount of abuse at the hands of impatient builders was a good friend indeed.

And abuse it could certainly take. Famously, the guys from slightly insane UK TV programme 'Top Gear' drove one to the magnetic North Pole - the first motor vehicle ever to achieve this, and probably to unblock a loo or tarmac someone's front drive; and even more bizarrely they parked one on top of an apartment block, blew the block up and, after a few makeshift repairs with primitive tools, drove it away. It is extremely unlikely that any builders in their right mind will canvas for business at the North Pole or carry round enough explosives to blow up an apartment block but this was certainly one tough machine.

A TV advertisement was created for the Australian and New Zealand markets; it was banned for a while, probably because it is hysterically funny; you can see it Here.

Over the years the Hilux has been improved both in power, comfort and sophistication and there has even been a four-wheel drive version introduced in 1979. Typically Toyota, many more versions have been introduced over the years as well, but the Hilux remains the best and most indispensable friend of many a builder, farmer, or adventurer.