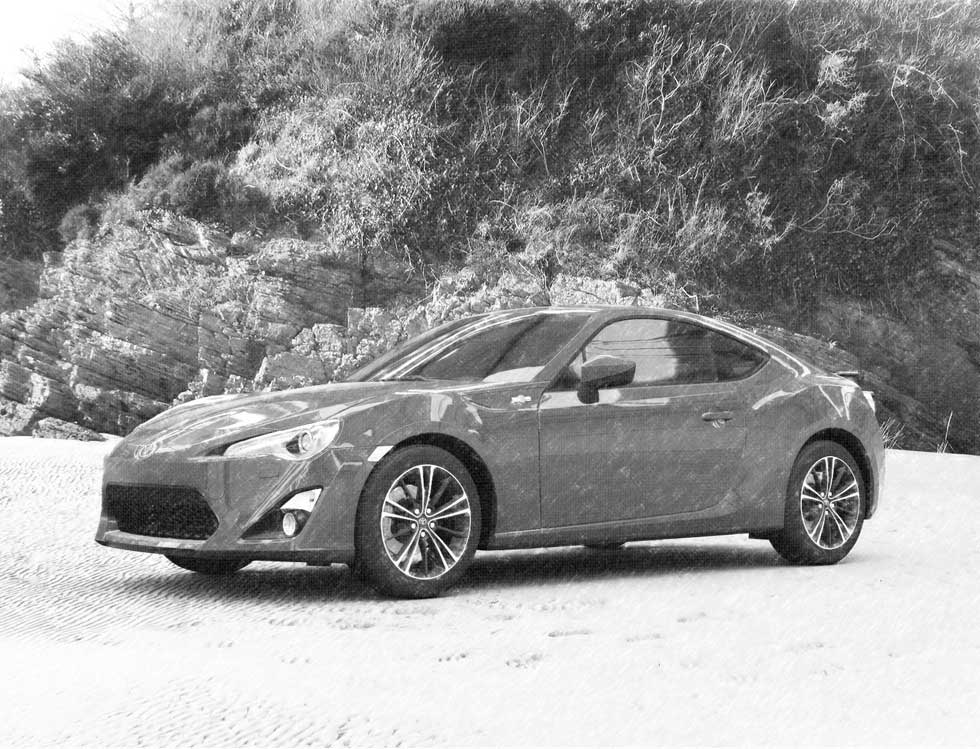 Toyota have long had a reputation for producing reliable cars of excellent quality but every now and again they brought out excellent sports cars, such as the MR2, Celica and Supra to remind the world that they could be innovative too, and create cars that were fun to drive. In the car market reputation is everything and building exciting machines like these have helped Toyota to become one of the world's leading car manufacturers of today. However by 2012 their latest fun cars were becoming just a memory and it was time to bring out another one, preferably one that could be a serious competitor to the Mazda MX5. This car was the GT 86.

This is very much a back to basics car, with no big surprises. It is a 2+2 fastback coupe but you would need to be pretty small to be comfortable in one of the back seats. The engine layout is a conventional front engine, rear wheel drive setup and the only engine that you can have is a two litre flat four cylinder unit producing 197 brake horsepower, which can propel the car to a maximum speed of 140 mph. You really wouldn't want to go much faster than that anyway; the tyres are pretty slim and anything faster than that could cause problems. Acceleration from nought to 100 kilometres per hour can be achieved in 7.6 seconds which is not supercar class but not bad either. There is no supercharger option and definitely no plans to offer one.

In short this is an everyday sports car which can be sold at a reasonable price whilst giving the driver and passenger – or passengers if anyone in the back is short of stature – an old-fashioned exhilarating drive.

There is a six speed manual gearbox – an optional automatic gearbox is available but why have one in the car of this type – and the engine really likes to rev. Maximum torque only comes when the pointer hits 6400 rpm; and whilst there have been a number of upgrades throughout the life of the car none of them have included an increase in power.

The car was created as a joint effort between Toyota and Subaru, and is in fact assembled by Subaru who also market a variant under their own name, the Subaru BRZ.

Internally there are two comfortable bucket seats and a tiny 14 inch steering wheel for the driver; the rear seats (if they can be called seats) can be folded down to give extra storage space. Creature comforts include a touchscreen interface with satnav, Bluetooth, sound system and a rearview camera.

Is it really fun to drive? In 2012 Top Gear's Jeremy Clarkson, who is not a man to suffer bad cars gladly, crowned it not only the car of the year but also coupe of the year.

The GT86 is not a supercar, but then it doesn't come at a supercar price either. The performance is sufficient to satisfy just about every potential buyer apart from out and out speed freaks and professional racing drivers, and it can be depended on to have the traditional Toyota longevity and reliability.