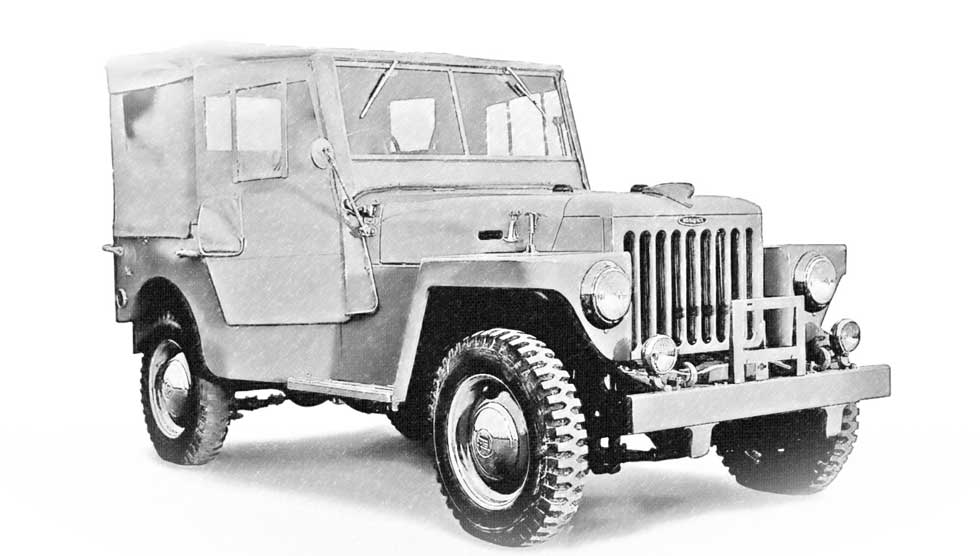 Toyota had their first experiences of manufacturing rough terrain vehicles after the Japanese army discovered an American Willys Jeep in the Philippines, were suitably impressed with it and instructed Toyota to produce something similar, but different. A light truck called the AK10 was produced but not many of these saw service on an actual battlefield.

Fast forward to another war; the Korean War which broke out in 1950. The American occupiers of Japan needed light utility vehicles, and quickly, so again Toyota were instructed to build a batch of them, this time closer to the Willys Jeep specifications. The result was the BJ Jeep which has stayed in production after numerous changes and improvements ever since.

The BJ first came out in 1951 and achieved a lot of valuable publicity in Japan when one of them was driven partway up Mount Fuji; the National Police Agency of Japan were so impressed that they ordered several hundred of them straightaway. The following year export sales began which upset the Willys company; they had trademarked the term 'Jeep' and, not for the first or last time, a Japanese company was accused of trademark violation. The name had to be changed; a major competitor at the time was the British Land Rover and Toyota's management decided to name their vehicle the 'Land Cruiser', which they felt was a significantly dignified trade name. What Land Rover felt about the closeness of the name to their own trademark has not been recorded.

This was an excellent and reliable vehicle; bigger than the Jeep and more powerful with a 3.4 litre straight six cylinder engine developing 84 brake horsepower with plenty of low down torque. This 4x4 quickly built itself a reputation as a go – anywhere vehicle. The markets in America and Europe were, however, already dominated by existing vehicles and so Toyota concentrated on exporting to emerging markets in Africa, Asia, the Middle East and South America. A particularly successful market was, and still is, in Australia where the outback can present considerable challenges to motorised vehicles and where new model development is currently undertaken.

This vehicle has been so popular that it is still selling today; and more than 5 million of them have been sold to buyers in more than 180 countries throughout the world. They're not perfect though. Whereas they were very successful in hot dry countries, in wetter ones they have a bad reputation for rusting; a delivery to the Irish army quickly succumbed in the wet climate there. Nevertheless throughout much of the world the Land Cruiser is popular with military forces, non-government organisations and foreign aid charities; as well as insurgents who found that fixing a machine gun or mortar onto the back has made it a very cheap and highly manoeuvrable weapons carrier!